Happy Monday! Today's read heads in the nonfiction direction and introduces young listeners/readers to a special project, which is hitting California this year. It's the beginning of the largest animal bridge in the world set for completion in 2024.. Did you know that this was happening? Well, I definitely didn't until I read this book. It tells the true story of a cougar, and how he inspired the public to finally finance the building of a bridge, which helps wildlife outside LA move to other areas without danger of being killed by highways, poison or whatever other dangers the big city holds.
But go ahead and peek at this one yourself. 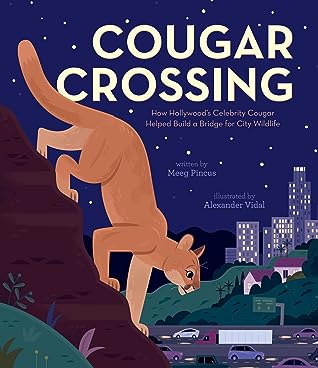 COUGAR CROSSING
How Hollywood's Celebrity Cougar Helped Build a Bridge for City Wildlife
by Meeg Pincus
Illustrated by Alexander Vidal
Beach Lane Books
Picture Book
40 pages
ages 4 to 8
Discover the amazing true story of P-22, the wild cougar living in Los Angeles, in this inspiring picture book.P-22, the famed “Hollywood Cougar,” was born in a national park near Los Angeles, California. When it was time for him to leave home and stake a claim to his own territory, he embarked on a perilous journey—somehow crossing sixteen lanes of the world’s worst traffic—to make his home in LA’s Griffith Park, overlooking the famed Hollywood sign. But Griffith Park is a tiny territory for a mountain lion, and P-22’s life has been filled with struggles.Residents of Los Angeles have embraced this brave cougar as their own and, along with the scientists monitoring P-22, raised money to build a wildlife bridge across Highway 101 to help cougars and other wildlife safely expand their territories and build new homes—ensuring their survival for years to come.
BOOK DEPOSITORY   /    GOODREADS   /     B&N    /    KOBO     /      AMAZON
BOOK BLINK
* true story about cougar P-22
* informs listener about cougars
* adds a bit of humor and keeps information interesting
* exact timeline and facts at end of book
MY TIDBITS
This year (2021), the largest wildlife bridge in the world is being built near LA and is set for completion in 2024. While there have been attempts to gain support for the bridge earlier, none of these gained momentum until a certain cougar made his way into LA and took residence in one of the local parks. This book describes how cougar P-22 found his space, managed to remain unseen by the public for years, and still caught enough attention to finally wake the needed interest for the financing of a wildlife bridge.
This book not only follows Cougar P-22 from his beginning search for territory all the way to the park, but it glides in facts about cougars and presents  P-22's story and more important moments. The text flows in a fun way, which young listeners can easily understand and enjoy. It's interesting to learn how P-22 managed to slip into the park and mark his territory. There's even a little tension and definite sympathy thrown in as he is discovered in a crawl space and does his best to survive...and that without ever hurting a person. The story is well done and keeps the listener in the pages.
The illustrations are bold and easy to follow. The artist does a nice job at keeping the cougar true to life and bringing across the various situations in a way listeners can visually connect with. At the bottom of each two-page spread, there is a pair of animal experts in a small bubble, who give their two cents as the tale unfolds. Not only do they drop in interesting facts and comments, which help to understand the situations, but they also add a tiny dash of humor every now and then. It's a nice extra twist and gives the story more life.
At the end of the book, there is a timeline, where each important stage of P-22s adventure is highlighted and described. Then, there's a section about cougar facts and more surrounding wildlife bridges around the world. The last two pages present various other animals found in Southern California. The reader is encouraged to revisit the story and illustrations again, and search for each one of these, since they are hidden in the pages. In other words, there are quite a few aspects of this book, which make it well worth a read.
And here they are...
Meeg Pincus, MA, has been a nonfiction writer and editor for over twenty years. In addition to being an author of children’s nonfiction and informational books, she is a humane educator who inspires students to care for people, animals, and the planet. Meeg lives in San Diego.
Originally from New Mexico, Alexander Vidal studied cultural anthropology and spent time living in Africa and Asia before starting his career in illustration. Travel, exploration, and a love of animals and wild spaces continue to drive the themes of his work. He is the illustrator of the board book So Many Feet; nonfiction family activity book I Love Birds!: 52 Ways to Wonder, Wander, and Explore Birds with Kids; and picture books Cougar Crossing! and Just You and Me. He is a graduate of ArtCenter College of Design and lives in Los Angeles.
on March 15, 2021