Review: Marvin : Based on The Way I Was by Marvin Hamlisch 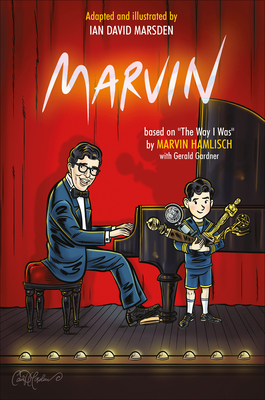 
As only the second person in history to be awarded the PEGOT (Pulitzer, Emmy, Grammy, Oscar, Tony), Marvin Hamlisch has quite an incredible story. This graphic novel adaptation of the biography of the renowned musician, composer, and conductor also includes his family's flight from Nazi-occupied Austria and their immigration to the United States. Accepted into the prestigious Juilliard music school at age 6, Marvin had to work hard to overcome intense anxiety before every performance. Despite his struggles and his self-doubt, he celebrated his first radio hit in his teens, wrote songs for a young Liza Minelli, worked with Barbra Streisand on Funny Girl, and won his first major award before the age of 30.

What better way to introduce middle graders to a renowned personality than through a bit of snark, humor (which snorts a giggle), and in graphic novel form!

Marvin Hamlisch wasn't born a renowned musician, composer and conductor. His childhood had his parents fleeing the Nazi's, him being enrolled at a top music school at the age of six...vomiting before every performance..., and composing his own songs and such already in middle school to land hits already when he was a teenager. And sometimes all of that with a big black eye from a baseball bat.

Opening up young readers to famous individuals they may or may not know isn't an easy task, but this book manages to do exactly that in a way which doesn't bore or bog down. While some of the material is heavy (dates, places and information), these moments are well buffered with humor and events which middle graders can relate to themselves. Marvin is allowed to be a kid in these pages, and while what he does is most definitely not ordinary on the music front, he's still a boy struggling to fit in with more adult expectations.

The authors keep humor close and let Marvin's dialogue come across naturally and at a level, which will resonate nicely with the intended age group. There are moments of heavier spouts of text (in the realm of graphic novel's definition of 'heavy'), keeping this one more for the upper end of the intended audience. But the rest flows very well.

The graphics not only help to set the time frames and scenes, but work very well with the text. Marvin is presented as a sympathetic kid and his expressions add to the humor, ensuring a couple giggles. And that's exactly what will keep the readers in these pages.
on March 05, 2020