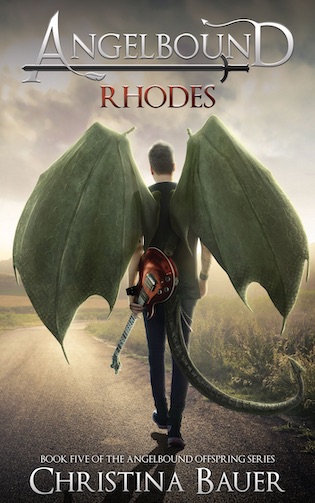 As dragon shifters, Rhodes and Zinnia should never have fallen in love. Why? Zin’s a princess while Rhodes is only the hired help. If the pair remain in the dragon realm, then age-old prejudices might tear them apart. But returning to Earth isn’t any better. In the human world, Rhodes and Zin are a musical sensation … and fame’s an even bigger relationship killer. Bottom line? Rhodes has huge decisions to make, both for himself and Zin.
Unfortunately, it isn’t clear what path—if any—will end with Rhodes and his love having a future together.

Firstly, if you haven't read at least the last book in the series before this one, Zinnia, you'll have to do that before hitting this one. This book builds where Zinnia leaves off...plus, the others are fun reads in and of themselves.

In this book, Zinnia is in her tower and doesn't see Rhodes as often as she'd like. He is, after all, in training. But of course, the two aren't going to let things stay that way, and neither are their friends. Soon, Zinnia has a plan, which leads to more adventure than she saw coming.

This book is a bit shorter than the rest and makes for a very quick read, but that's not only due to the length. At the turn of every corner, the two main characters and their friends are facing new challenges and decisions. There's never a boring moment as the action speeds along from beginning to end. Add the romance in with the magic, fight scenes, secrets, and fun, and it's quite the mix.

This book is told from various perspectives, which allows insight in the right direction exactly when it's needed. It keeps everything on its toes, but then, the characters are good at that themselves. Each one holds spunk and determination, and the snark keeps the humor high.

Fans of magic, teen romance, dragons, music bands, secrets, fight scenes and simply entertaining reads are sure to enjoy this one.

Don’t Miss These Series From Christina Bauer
– Fairy Tales of the Magicorum, a series of modern fairy tales with sass, action, and romance
– Beholder, where a medieval farm girl discovers necromancy and true love
– Dimension Drift, a dystopian adventure with science, snark, and hot aliens
– Pixieland Diaries, about a sassy pixie Calla who falls for Dare, an icy elf prince
Get your FREE copy of Christina’s novella, BEVERLY HILLS VAMPIRE, when you sign up for her personal newsletter: https://tinyurl.com/bauersbooks***Not available in stores***

Christina Bauer thinks that fantasy books are like bacon: they just make life better. All of which is why she writes romance novels that feature demons, dragons, wizards, witches, elves, elementals, and a bunch of random stuff that she brainstorms while riding the Boston T. Oh, and she includes lots of humor and kick-ass chicks, too.
Christina graduated from Syracuse University’s Newhouse School with BA’s in English along with Television, Radio, and Film Production. She lives in Newton, MA with her husband, son, and semi-insane golden retriever, Ruby.
Be the first to know about new releases from Christina by signing up for her newsletter: http://tinyurl.com/CBupdates
Stalk Christina On Social Media – She Loves It!