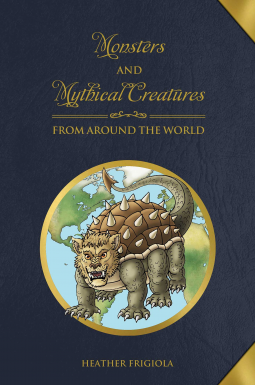 Mythical creatures are cultural artifacts--creations of the human imagination from all around the world. From terrifying monsters to sacred mystical beasts, weird-looking humanoids, magical birds, and many other fantastic beings, the mythological creatures in this book are sure to enchant and amaze! Discover myths and legends spanning from ancient times to modern day from every corner of the globe. Learn the cultural origins of 240 different mythical creatures, captured in ten chapters and 100 colorful illustrations. You will find terrifying bogey monsters as well as benevolent guardians. Meet creatures that symbolize obstacles to overcome, ones that explain the occurrence of disease, some that ward away evil, and others that were created simply for amusement. Explore mythology from the Middle East, Africa, India, Japan, Mexico, Europe, Polynesia, and beyond. This guide is a ticket to travel the world and discover its strangest magical beasts from the safety of your own home.

Friends of fantasy, myth and folklore will love diving into this book and find all sorts of creatures they probably have never even heard about before.

Every culture around the globe has a wealth on amazing monsters and creatures in their traditions and folklore. Divided into geographical areas, this book introduces a vast number of monsters and other mythical creatures found in tales, writings and beliefs. Each section is alphabetically organized, and there is a glossary at the end. The monsters/creatures are described along with the more curious aspects surrounding them. Many are accompanied by illustrations to help the imagination take flight.

These pages held all I had hoped for and more. Broken down by mostly continent (but not only), it's fun to flip through the various creatures found in the different myths around the world. Not only well-known creatures are presented, but also lesser familiar ones and some I'd never heard of. Each description is concise, mentions the basic and main aspects of the creature, and gives a quick example of where the creature is found in mythology. The writing is interesting and easy to understand. Many of the creatures are accompanied by a colorful illustration. Of course, I would have enjoyed having every single one depicted, but the amount of creatures presented makes this impossible.

The bounty of monsters is amazing and a real treat to flip through. The myths themselves aren't given, only in short details as needed, but it's exactly what this book is about. Anyone who has a love for myths, folklore and tales is going to thoroughly enjoy this book. It's wonderful not only as a quick guide to already known creatures, but surprises on the amount of lesser known ones. While not necessarily intended for the younger audiences, it's also suitable for younger readers (ages ten and up).

I'm adding this one to my shelves and will definitely have it in hand repeatedly for many years.

The Author...
Author Heather Frigiola is a creative researcher with a master's degree in cultural anthropology. Originally from the suburbs of Washington, DC, her life adventures have taken her all across the United States. She has been teaching assistant and a guest lecturer at different universities, specializing in topics such as human animal interaction, ancient civilizations, and comparative mythology.


The Illustrator...
Illustrator Sky Cybele is the creator of the Mythical Creatures Oracle. She lives in an enchanted world full of magical beasts and also sells unique hand-beaded necklaces and likes to dance.
on December 26, 2019