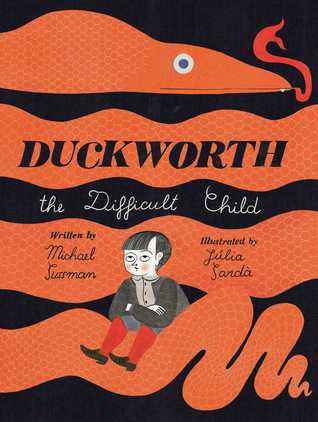 
Duckworth’s parents think he is a difficult child, so when a snake slides right up and swallows him whole, his parents don’t believe him! What’s poor Duckworth to do?

Duckworth is a difficult child.
At least that’s what his parents think.

So when Duckworth tries to explain that a gigantic snake slithered out of his closet, his parents insist it’s all in his head—he is far too old to be imagining such nonsense. (And will he please do his chores?) But even when the cobra slides right up and swallows Duckworth whole, his parents remain unconvinced! (Where did he find that snake costume, and will he please put it away?)

What’s poor Duckworth to do when his parents just won’t listen? With nods to the deliciously dark humor of Edward Gorey, Florence Parry Heide, and Jon Klassen, Michael Sussman and Júlia Sardà empathize with children everywhere who must find ways to deal with their difficult parents.

Children are in for a treat as they learn that they might not be the only ones with difficult parents...and their parents might not be so difficult after all.

These pages flip-flop the usual, wonderful parent setting found in picture books, and demonstrate how some kids feel completely misunderstood (and somewhat ignored). But in a slightly dark and humorous way. Duckworth hits the first page as a very normal kid. He's not mean. He's not disobedient. But his parents are a bit stuck in their own thoughts and ways. It's bitter-sweet, and as a parent, makes you want to give Duckworth a big hug.

While not a feel-good-read, this one will have kids giggling, gasping and wondering how Duckworth will make it (while having a few more giggles in between). Young listeners will connect with it...as every kid feels a bit ignored at one time or the other...but it also ends with humor and a bit of a self-confidence boost. (And a way to keep those snakes from sneaking out of the closet).

The illustrations are lovely but not quite as colorful and bright as many seen in picture books. It fits the stuffy atmosphere of Duckworth's world extremely well. There are small details filtered in, which young listeners will enjoy. And the snake is so big and bold...which might be saying more than what one first thinks.  After hearing the tale, young listeners will grab this one on their own just to flip through the pictures and dive into the story. 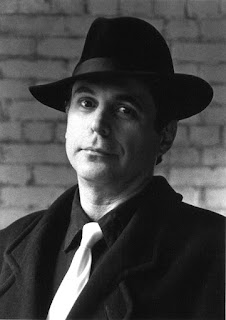