Review: Out of Bounds by Elena Delle Donne 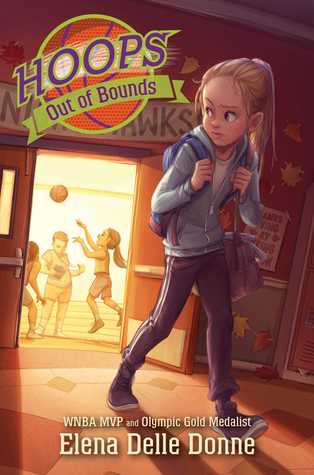 
From WNBA MVP, Olympic gold medalist, and global ambassador to the Special Olympics Elena Delle Donne comes the third novel in a middle grade series with as much heart as there is game.
Elle is finally finding her groove and is excited about how her year is turning out. But when her team loses a major game against their rivals, Elle doesn’t know if basketball is worth it anymore. It feels like she can’t win—even when she’s improving and doing well, everyone always expects more from her.
With her changing attitudes on basketball, will she let everyone she knows down if she decides to take a break?

This is the third book in the Hoops series. Since the story builds from one book to the next, it's best to read it as a series.

Elle is settling into the basketball swing of things again but is running into more and more troubles with one of her teammates, who wishes she had Elle's position. It doesn't help that Coach keeps singling Elle out. To make matters worse, Elle's best friend starts skipping out on her to visit this same teammate and might even be dating her soon. Being taunted from every direction is slowly more than Elle can handle, and she's not sure she wants to put up with any of it anymore.

Elle is easy to connect with and feel for. While she has a huge interest in basketball, she has other things going on in her life as well. The idea of a scheduling app, which shows up in this book, is something many kids will relate to. But what makes Elle special is that she is kind, loving and simply a good person. The problems she faces are very realistic and things the average reader can identify with. While the basketball and sports aspect is very strong, it's not enough to push away even those readers who don't necessarily play sports themselves. The problems Elle faces can be found in other areas of life too, making this a read for any middle school girl.

The writing flows very smoothly and does a nice, constant switch from basketball to a normal kid's life. Especially the younger end will enjoy the easy to read sentences. While the plot flows well, it does slow down at times during Elle's home scenes and allows the average life to come forward too. Unfortunately, this book ends without a resolution to Elle's problem, and instead leaves off for the next book to continue. It's a nice series, especially for sport minded girls.

Elena Delle Donne has been a professional women's basketball player since 2013, when she was selected by the Chicago Sky second overall in the WNBA draft. She was the 2015 WNBA MVP and won the gold medal with the USA's women's basketball team in the 2016 Olympics. She is the global ambassador for the Special Olympics and became the first national ambassador for the Lyme Research Alliance. Elena also plays host to Delle Donne Academy, a basketball camp that runs throughout the year, where she mentors and coaches girls ages seven to eighteen. She now plays for the Washington, DC, Mystics.
on January 28, 2019

Email ThisBlogThis!Share to TwitterShare to FacebookShare to Pinterest
Labels: Elena Della Donne, Hoops, Out of Bounds