Review: On Point by Hena Khan 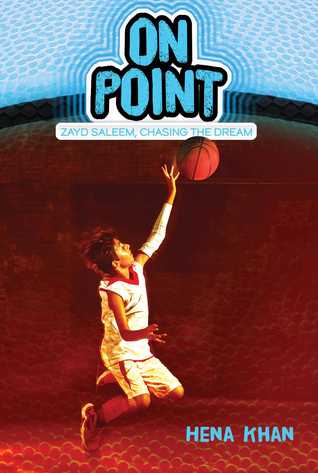 From the critically acclaimed author of Amina’s Voice comes the second book in an exciting new middle grade series about a scrawny fourth-grader with big dreams of basketball stardom.Now that Zayd has made the Gold Team, he’s hustling hard and loving every minute of the season.But when team starts to struggle, Zayd can’t help wondering if it has something to do with him. Even worse, his best friend Adam suddenly starts acting like he doesn’t care about basketball anymore, even though they are finally teammates. He stops playing basketball with Zayd at recess and starts hanging out with other kids. Then, Adam up and quits the Gold Team to play football instead.While his uncle’s wedding preparations turn life into a circus at home, Zayd is left on his own to figure things out. He has to decide how to still be friends with Adam and step up to fill the empty shoes he left on the court. Does Zayd have what it takes to be on point and lead his team back to victory?


Basketball on and off the court take on exciting twists in a novel for sport fans.

Zayd is now on the team, just where he always hoped to be. But nothing's going quite like he expected it would. The team's unbeatable season the year before seems like a forgotten dream as they lose game after game. To make matters worse, Adam, the team captain and best player, is thinking about switching to football. Zayd finds himself lost as all others begin to look to him for direction. But then, even his family seems to be doing odd things with the wedding coming up.

I did read the first book in the series and suggest starting with it before hitting this one, since much of the character grounding happens in book one.

Zayd's enthusiasm dies quickly in this book and his disappointment is tangible. He never comes across as a whiner either. Zayd is simply at a loss and insecure now that the coach expects more from him. The emotions are real without being over-emphasized, and it's something kids will easily identify with. Especially when it comes to the problems with his best friend, as Adam chooses a different road. There's a lot changing, and it's exactly this which the book looks at.

The author does a nice job at balancing Zayd's family life with his sport one, while building in a wonderful parallel. While Zayd is having trouble in his new leading position, his uncle is having similar problems when it comes to the wedding organization. It's a clear message without feeling preachy.

Like in the first book, the basketball moments come across smoothly and spot on. Zayd is in the game as any boy his age would be. The traditions of the Pakistani wedding also fall subtly in along the sidelines, giving the story a nice flair while gently informing the reader about the culture.

In other words, this is again an interesting read sport fans are sure to enjoy, and the short length makes it easy to read.

Hena Khan is the author of several books including Amina's Voice; Power Forward; On Point; Bounce Back; It's Ramadan, Curious George; Golden Domes and  Silver Lanterns; and The Night of the Moon. Hena lives in her hometown of Rockville, Maryland, with her husband and two sons. You can learn more about Hena by visiting her website at HenaKhan.com.