Review: The Last of the Navel Navigators by David Hailwood 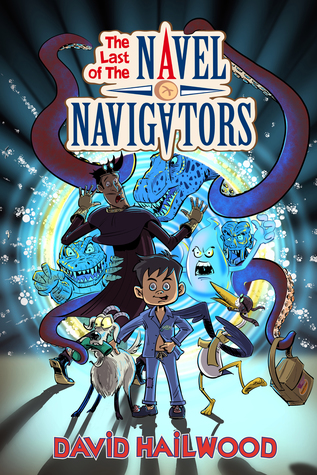 Discovered in a swamp and raised by hillbillies, Jellybean 'Gator Bait' Skratcher soon learns he has the astounding ability to open portals to other worlds, using his bellybutton.
He sets out on an epic adventure across a hostile universe, led by a scatterbrained stork who's made it his mission in life to deliver Jellybean to the right parents, or die trying.
But when your best friend's a goat, and your greatest hope for survival relies solely upon a talentless magician who can only do card tricks, nothing is likely to go as planned!

With is a fast and furious space adventure with tons of fantasy, ridiculous moments and simple fun.

The stork was supposed to deliver the baby to his parents, but thanks to an unexpected even, the baby landed in the swamp to be raised by deep, south hillbillies. Branded later with the name Jellybean, the boy accidentally opens a portal to space and adventure. It turns out that he's a navigator, a rare breed indeed, and he has a mission. But not only is he clueless about everything, his newly won sidekicks aren't any better. Pure chaos is unavoidable.

These pages fly by with super sonic speed and carry tons of imagination with them. Jellybean first comes across a little lost in his own skin but not unhappy with his situation completely. He has tons of room to grow as he discovers the endless possibilities...and I do mean endless...of the universe and his own existence. And he seems to handle all of it with a simple form of finesse.

The quirky humor knows no bounds when it comes not only to the various places and obstacles Jellybean faces, and those around him are original in every way. The dialogue and situations hit in rapid form. At times, it's so fast that it comes across as a roller coaster ride and borders on chaos. The main meat of the story takes a bit to dig in, but this book concentrates on fun. Some jokes might go over readers' heads, but silliness is definitely king. Especially boys will enjoy diving into this one.

Fans of quirky humor and space adventure in a very imaginative array will be taken on quite a ride in this tale.

David Hailwood is a two-time BBC Writers Room sitcom writing finalist, who’s had comedy material broadcast on ITV and E4.  He’s spent the past twenty years writing comic scripts for numerous publications around the UK, including Egmont’s best selling children’s comic ‘Toxic’.  He edits the ‘100% Biodegradable’ comic anthology, and his previous book of Alternative Facts ‘Not A Lot Of People Know That’ (co-written with F.J. Riley) received over 80 5-star reviews and made it into the iBooks top ten ‘Free Humour’ chart, where it currently resides at Number 6.  His debut children’s fantasy novel ‘The Last Of The Navel Navigators’ was awarded a Distinction as part of his Creative Writing MA at University of Chichester, England.

Universal Book Links (take you to the most appropriate store for your country):