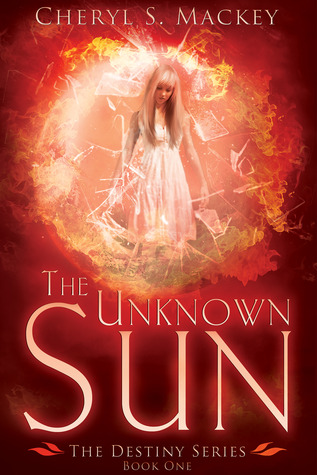 THE UNKNOWN SUN
The Destiny Series, Book One
by Cheryl S. Mackey
YA Fantasy

A strange boy who knows too much about Moira’s tragic past wants her dead. Rescued by winged twins Airi and Belamar, she is taken to safety in their world.
Skyfall is in ruins, its vast, beautiful, wilderness only a decayed shell of a once vibrant and magical world. Guided by destiny, Moira, Airi, and Belamar must find a journal left by the twins' deceased mother, Tanari, that tells them how to save their world.
Dark secrets unravel around the three friends as a revolution led by the strange boy threatens their lives…and the quest to save Skyfall.


After multiple deaths in her family, Moira has lost almost everything. Even life is a struggle as people question why she survived the deadly accidents, while the rest of her family died. When she's suddenly attacked by a strange man with green eyes in her living room, two angle-like creatures come to her rescue and take her to another world, Skyfall. There, she discovers that there's so much more to her than she ever suspected. . .or wanted to know. Now, she's expected to save an entire world.

Moira hits with sheer loneliness and isolation. The baggage from especially her sisters' deaths has left her in a serious state of self-doubt, and this reflects heavily on the scenes at high school as she's shunned to the extreme (at times, excessively so). These first chapters are raw, and the attack from the stranger grabs with tension pure. And this has a great contrast with Skyfall, where she wakes up and finds herself in light and with a sudden pair of very close friends.

The tale keeps a nice pace. Most of the high action doesn't happen until the later chapters, letting the plot concentrate on Moira and her search for the truth. The search involves more of a logical discovery than real action, something which will delight fans of character depth and emotional bonding more than fast-paced hopefuls. There are many layers of secrets and these are laid out nicely, while holding several surprises. There's still enough left open to lead into the rest of the series.

Friendship is key in this book, one that happens instantly. The reasons for this are laid out, but especially the bond to Belamar (a romance) is rather sudden. Still, it's warming as the tale goes on and builds a nice set-up for tension at the right moments.

This is a prophecy book but does hold several refreshing and new twists. The author does a lovely connection to Greece and builds a beautiful world and history. While some areas could flow better and there are typos, the story is entertaining.

It's a nice start to what appears to be an interesting series.

Email ThisBlogThis!Share to TwitterShare to FacebookShare to Pinterest
Labels: Cheryl Mackey, The Destiny Series, The Unknown Sun, YA Fantasy