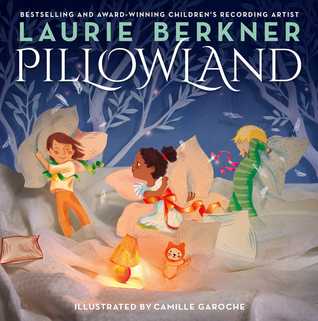 Laurie Berkner, “the queen of children’s music” (People), pairs the lyrics of her beloved hit with Camille Garoche’s gentle illustrations in this winning bedtime picture book—a must-have for fans of Laurie’s music and all things soft and sweet.
I know a place, a kingdom far away,
where people wear pajamas every night and every day.
Where all the houses, the buildings, and the trees
are made of fluffy pillows that are soft as they can be.
Laurie Berkner’s treasured song “Pillowland” is now a beautiful picture book! Featuring magical, lush art by Camille Garoche, Pillowland carries readers away to a feather-fluffed dream world where bedtime is always a grand adventure.
We’re going to land in Pillowland!

With amazing illustrations and a text which invites to fluffy pillows and dreams, this is a lovely book to match Laurie Berkner's popular song or simply as a wonderful, nighttime read.

Pillowland is a fluffy, puffy place full of fun and adventure. The text is simple and follows the lyrics of Laurie Berkner's song, Pillowland. While knowing the song adds a great basis for this book and makes it that much more fun to read, it's also enjoyable without knowing the song. It works great as a read-aloud even for younger listeners, especially with fun sound effects such as 'zoom! zoom!' and 'wheee!' It invites to imagination pure while bringing a comfort of softness and enjoyable dreams. For those who don't know the song, the text might come across a little strange at times, but this problem is solved with an extra treat found on the back of the book. A simple musical score of the song is printed there so kids can learn the song or sing along.

The illustrations are unique and a treat. With a mixture of paper cut-out art and real life items, the illustrations gain a whimsical and imaginative feel. It's fun to simply flip through the book and gaze at the pictures.

Fans of Laurie Berkner are sure to love this one, and those who don't know her will discover a lovely place where kids can dream and enjoy a fluffy world.

Recognized as "the queen of children's music" (People magazine), Laurie Berkner is a singer, songwriter, lyricist, author, and founder of Two Tomatoes Records.  She has released twelve bestselling, award-winning albums, was the first recording artist ever to perform in music videos on Nick Jr., and appeared regularly on the network’s Jack’s Big Music Show.  Laurie's music has graced the short-form animated series Sing It, Laurie! on 24-hour preschool television channel Sprout, and she has been a frequent  guest on Sprout's Sunny Side Up morning show.  Venturing into the theater world, Laurie has written music and lyrics for two Off-Broadway children’s musicals produced by New York City Children’s Theatre:  The Amazing Adventures of Harvey and the Princess and Wanda’s Monster.  A third NYCCT show featuring Laurie’s music and lyrics, Interstellar Cinderella, will open Off-Broadway in November 2017. What sets Laurie apart?  Her music speaks to kids without talking down to them, charming youngsters without boring grownups.  Laurie finds inspiration in her audience.  “I want to create songs that matter for children,” she says.  “I was singing once and saw a four-year-old girl shut her eyes and start swaying to the music.  I thought, ‘That’s the reason I got into music.’  It keeps me wanting to do more.”


Camille Garoche was born on a Tuesday. She spent her childhood in the southwest of France, terrorizing her brothers and sisters by drawing them stories about zombie cats. One day she decided to go to Paris to study applied arts. Now, at thirty years old (and a bit), she has publisehd more than thirty books for children. Today, she devotes herself primarily to her own stories—while listening to detective stories in her workshop in Montreuil, France.
Se more of Camille's work at camille.garoche.me