Review: Beyond the Doors by David Neilsen 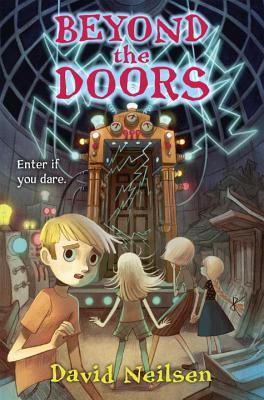 Fans of A Series of Unfortunate Events and Coraline will devour this dark and creepy, humor-laced tale about four siblings who discover a mysterious world where secrets hide around every corner.

When a family disaster forces the four Rothbaum children to live with their aunt Gladys, they immediately know there is something strange about their new home. The crazy, circular house looks like it stepped out of a scary movie. The front entrance is a four-story-tall drawbridge. And the only food in Aunt Gladys's kitchen is an endless supply of Honey Nut Oat Blast Ring-a-Dings cereal.

Strangest of all are the doors--there are none. Every doorway is a wide-open passageway--even the bathroom! Who lives in a house with no doors?

Their unease only grows when Aunt Gladys disappears for long stretches of time, leaving them alone to explore the strange house. When they discover just what Aunt Gladys has been doing with all her doors, the shocked siblings embark on an adventure that changes everything they believe about their family and the world.

This is a quirky, quick-paced, packed with imagination ride, which will have readers sitting at the edge of their seats until the very last page.

When the four Rothbaum children are called into the school office one day to discover their father had a car accident and is in coma, their lives are flipped upside-down. Since their mother is no where to be found and has been that way for years, they are sent to live with an aunt, who, up until that point, no one knew existed. The aunt's home is as strange as the aunt herself. . .in a nice but very confused way. And she has one very strange rule—don't touch doors. In the house, all doors have been removed. Instead, stacks and piles of old doors are piled in the rooms on the upper floors. But the strangest thing lies in the middle of the house in a huge room which can only be reached through a hatch like those found on a submarine. It's here where the four Rothbaum children's adventure really begins.

The first chapters of this book ring a familiarity to A SERIES OF UNFORTUNATE EVENTS, but the similarity quickly slides away as a very original tale takes over. These pages are chucked full of quirky wonders and unexpected twists and turns, although the idea of walking into secret places might seem familiar at first. It's the type of idea, which will easily draw in reader's curiosity and touch that shadowed spot in the corner of the mind, where everyone wonders what might be hidden behind unknown doors. It slightly creepy, definitely adventurous and chucked full of fantastical moments and events, which drive the imagination forward and more.

The Rothbaum children come across like normal siblings. They quibble, they snip at each other, they do the opposite of what they other tells them, but they stick together through thick and thin. The back and forth dialogue is crisp and completely natural. And when the not-so-sane aunt jumps in, the dialogue submerges into the area of cleverly hilarious.  There isn't tons of depth, but there doesn't have to be and shouldn't be. These kids are on the adventure of their lives—the kind that intended readers dream of experiencing themselves.

Summed up, this is a delightful read full of everything a children's fantasy should have. Friends of slightly creepy with lots of quirky fun action will devour this story and never see a door the same way again. 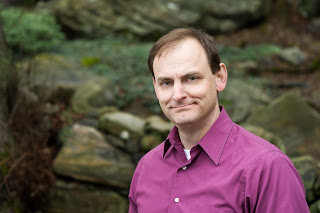 David Neilsen is the author of Dr. Fell and the Playground of Doom, and several other odd, weird, supernatural, and occasionally slightly disturbing books and stories. David is also a professionally trained actor who works as a professional storyteller up and down the Hudson River Valley and in New York City. His one-man performances based on the work of H.P. Lovecraft have sent many screaming into the hills in search of their sanity.

You can find out more about David at. . .