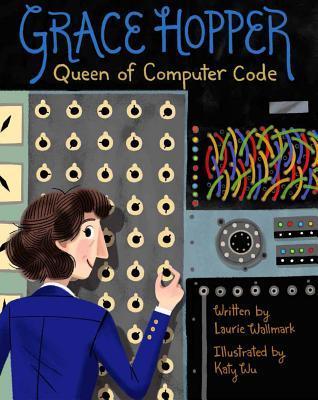 
“If you’ve got a good idea, and you know it’s going to work, go ahead and do it.” The picture book biography of Grace Hopper—the boundary-breaking woman who revolutionized computer science.

Who was Grace Hopper? A software tester, workplace jester, cherished mentor, ace inventor, avid reader, naval leader—AND rule breaker, chance taker, and troublemaker. Grace Hopper coined the term “computer bug” and taught computers to “speak English,” and throughout her life succeeded in doing what no one had ever done before. Delighting in difficult ideas and in defying expectations, the insatiably curious Hopper truly is “Amazing Grace” . . . and a role model for science- and math-minded girls and boys.

I'll admit, I'd never heard of Grace Hopper before I saw this book, but after reading this, I have to agree that she was truly an Amazing Grace.

Grace Hopper was many things, but her biggest talent landed in the areas of math and computer programming. Not the type of programming which is done today, but Grace had to discover the programming language for herself and was the first to teach computers to 'speak English' (or programmed in more than just 0 and 1). But that wasn't all she did. Never letting anyone stop her (not even the US Navy), she followed her heart's desires.

This book is claimed to be for audiences ages 5 and up, but I'd place it a little higher to the age of 7 (and children that age do still love picture books). Not only is this due to the amount of text and writing, but rather the theme isn't something most younger kids will be very interested in or even understand. That's not to say that this isn't written nicely. It is. The author does an amazing job of bringing a relatively dry topic to life, and even manages to sprinkle in tons of smiles and giggles along the way.

The illustrations bring the whole thing to life and make it clear that even someone who loves math like Grace is by no means a boring person. She leaps across the pages until her excitement flows from the pages and draws in. There's even a dragon or two sprinkled in. . .because believe it or not, Grace took a break from computers for awhile to illustrate fantastical creatures too. Her excitement and tenacity radiates from every page and is an inspiration to especially those kids who let their hearts wander in a mathematical or scientific direction.

With a BRA in Illustration and Entertainment Arts from Pasadena Art Center College of Design in 2007, Katy Wu has worked for Google, Laika, Pixar, CinderBiter, and Simon & Schuster. Grace Hopper is her first picture book. Having worked on such projects as the feature film Coraline, and various shorts (La Luna, Car Toons)as well as CG, 2D, stop motion, online games, and content for social media platforms, Katy is an incredible talent. She lives and freelances in New York City. Follow her online at katycwwu.tumblr.com